This post contains a set of automation stories curated by the Power CAT team with a focus on robotics process automation (RPA) in Power Automate.

From citizen developers with no formal programming background to seasoned “pro-devs/ RPA devs” to partners with decades of software experience to IT pros managing cloud services and infrastructure, several have setup an Automation Center of Excellence and are cultivating communities of makers to further expand low code development throughout the organization.

Komatsu Australia built a Robotic Process Automation (RPA) solution with Power Automate and AI Builder to automate their manual and repetitive processes for fixing invoices. They went from purchasing licenses to an RPA solution in production within a short span of four weeks. The RPA solution saved them 300 hours a year in invoicing for this supplier alone, and they’re now expanding it to cover all suppliers. 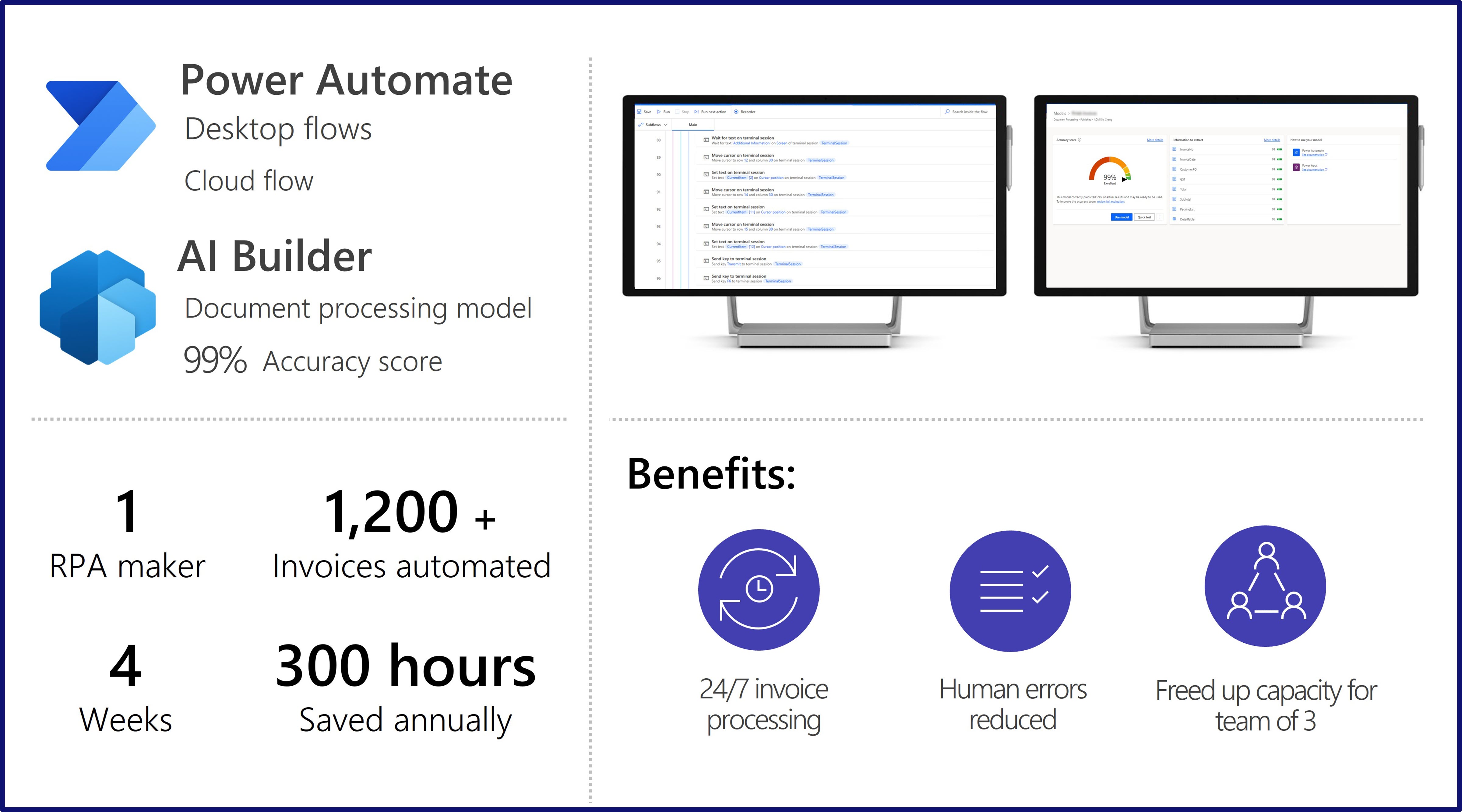 Brian Hodel is a Power Platform developer at T-Mobile with a background in Six Sigma, continuous process improvement and RPA using Winshuttle. In this session Brian, shares his journey from an automation developer perspective. He shares how he started with cloud flows in Power Automate, leveraged Power Automate Desktop to migrate legacy systems and process 12x more requests with no data errors; use process advisor to optimize how to automate the process, AI to automate manual tasks of data entry and chatbots to enable users to self-serve themselves. Brian also shared his views on shadow-IT, key pillars of COE and Power Platform benefits. Jeff Hiscock, an IT Enterprise Architecture Manager at Pembina Corporation, based in Calgary, is helping lead the vision and strategy to enable more business units drive rapid automation with Microsoft Power Platform. Cameron Relke is a Commercial Analyst in the Transmission Business Unit, who, as a citizen developer has innovated within his business through adopting Power Automate Desktop. By doing so, he has automated the mundane aspects of his own job and advanced his career. Learn from Jeff and Cameron on how they’re collaborating across IT and business units to scale rapid automation with the Power Platform. With a mission to be the premier P&C franchise in the independent agency channel, Hanover Insurance is a leading provider of specialized property and casualty insurance products to individuals, families, and businesses. In this session, hear from business leader Mina Rona and Automation leader Prashant Hinge on how they have leveraged Power Automate Desktop and Power Apps to automate the manual time-consuming tasks spent on the underwriting process. This has saved Hanover hundreds of hours and inspired the team to think of more opportunities for automation to save for their skilled staff.

Mina Rona is Vice President and Chief Underwriting Officer with over 24 years of experience in the insurance industry. Prashant Hinge is Assistant Vice President responsible for innovation and strategic integration. In addition to the technical solutions, this story highlights the strong collaborative partnership that have made the strategy and implementations a success. Processing a cartridge replacement required a dedicated customer relationship management (CRM) agent to manually push it through a complex 11-step process involving multiple disparate systems, such as SAP and more. A single agent could service only 50 Freestyle orders; however, nearly 50,000 orders were in the queue.

Power Automate provided an ideal solution, automating repetitive processes across Windows and web applications. Now, when a CRM agent enters an order into the CRM system, a desktop flow (RPA) signs into the SAP system, accesses orders that are tracked in a Microsoft Azure SQL database rather than an Excel spreadsheet, and creates a purchase order. The flow then submits the order to the supplier’s web applications and monitors the email system for invoice and delivery emails, and extracts information from the attachments to close the process in the Accounts Payable system—all using desktop flows (RPA) running in unattended mode, a key capability of Power Automate. The solution was built by Happiest Minds, a gold competency member of the Microsoft Partner Network

TC energy describes how they have empowered business technologists – putting technology in everyone’s hands – not just to use it, but to build it. They have posted a blog on their website for details.

Every day, hundreds of millions of transactions are processed through Microsoft Power Platform, in a massive operation that runs 24 hours a day, 7 days a week. Because so much of the case management surrounding those transactions involves manual work, the sheer volume means a degree of inefficiency and human error is unavoidable. Modern systems have the advantage of APIs to eliminate that inefficiency and the possibility of human error. For legacy systems that don’t have the luxury of an API, RPA accomplishes the same thing.

For the thousands of BPO agents stationed throughout the world, using RPA as a virtual worker to replace agents for mundane, repetitive tasks frees them up for more impactful work. To date we’ve incorporated 1,100 business rules into RPA, which translates to upwards of 10 million instances of those rules being automated bringing the efficiency and security of digital transformation to legacy revenue processing platforms. Aioi Nissay Dowa Insurance, Japan’s largest insurance company, has created a virtuous cycle in which Microsoft Power Automate Desktop flows are used to optimize citizen developer training and certification processes. This helps empower citizen developers in the company, who in turn have become catalysts for accelerating their digital transformation.

Aioi Nissay Dowa is on track to increase its citizen developer certifications by 350 percent and reduce its training costs by USD1.4 million, transforming its company culture to foster a more proactive, innovation-driven employee mindset. AT&T has been taking advantage of unattended RPA in Power Automate since the start of 2021, and we’ve been partnering with them on building and improving our hosted RPA bots at scale, pushing the edge of what’s possible in digital transformation. They’ve welcomed citizen and pro developers to create automations that not only help individual groups but their entire enterprise. AT&T calls this the democratization of AI—making AI and machine learning tools and capabilities accessible to every employee, even if they’re not data scientists or developers. With more than 2,500 unattended RPA automations running across 1,600 virtual machines, they are no stranger to scaling automation.

“Using Power Automate RPA has been transformative for AT&T. And the benefits of hosted RPA bots will help eliminate hours of tedious, manual work to be able to focus on serving the customer and optimizing AT&T’s operations. Our employees continue to embrace and enable business transformation using Intelligent Automation.”—Dhru Shah, Director of Technology, AT&T

Take Johnie Mcgee, who is an Applications Developer at AT&T. Johnie created an intelligent automated flow in Power Automate that also leverages AI Builder to differentiate between invoice and permit documents so that they can automatically be processed. Sporting around 99 percent accuracy, this flow can save a projected 3,500 hours a year, opening opportunities for AT&T workers to ideate ways to push the enterprise further.

AT&T’s focus on robotic process automation is part of a years-long tech transformation and modernization effort, which includes migrating applications to the cloud, pioneering software-defined networking and network function virtualization, and bringing edge compute capabilities into the network.